The Specified Information Order states that the Office of the Police and Crime Commissioner must publish the most up to data. Please see below for information surrounding the Complaints Handling Function.

If you would like to find out further information about the complaints function within the office, please read our leaflet.

Police and Crime Commissioners assess their own performance in carrying out their other complaints handling functions.

It is recommended that the assessment should include:

The timeliness of complaint reviews e.g. the average time taken to complete reviews

The average time taken to complete a review and send the final response to the complainant within the Office of the Police and Crime Commissioner for Bedfordshire is 25 days as of 8th August 2022.

Details of which review functions the PCC has delegated and what measures they have taken to ensure quality, integrity and impartiality

Complaint reviews are managed by the Head of Governance and Transparency in the Office of the Police and Crime Commissioner for Bedfordshire and administrative support is provided to the Head of Governance and Transparency by the Compliance Officer. A reviews log has been created for the Transparency team to ensure that all reviews are recorded and logged for key dates and themes, whether the review has been upheld or not, feedback and to ensure that the time taken to complete all reviews is in line with IOPC statutory guidance.

All reviews are Quality Assured by the Chief Executive before finalising and sending out to the complainant. Any learning following a review decision is also taken to Delivery and Beating Crime Board for the Force Executive Team to be informed and for it to be formally minuted.

If the complaint has been found to be reasonable and proportionate in the circumstances and resulting in the review outcome not being upheld, this may lead to the complainant having continued dissatisfaction as they have the belief that the decision is incorrect. The only right of further review is for the complainant to submit a Judicial Review. Bedfordshire OPCC have not received any notices in regards to decisions they have made following a review outcome.

When the Chief Constable has not had any personal involvement into a case or dealings with the complainant and delegates such as responsibilities to others within the organisation, a Chief Constable complaint cannot be recorded. The IOPC statutory guidance states ‘A.7 There will be times where a complaint names the chief officer or acting chief officer, but the complaint is actually about something where authority has been delegated to another officer or staff member within the force. Where the local policing body receives a complaint for which is it is not the appropriate authority, they must forward the complaint to the appropriate authority.’

Therefore, where it is immediately clear that the Chief Constable or Acting Chief Officer has had no involvement, the local policing body must take the steps to inform the complainant that they are not the appropriate authority and that the complaint must be passed to the police to review.

The OPCC monitors Bedfordshire Police Force complaints handling by completing dip sampling on a monthly basis. Currently each month the Transparency team contact the Professional Standards Department on a monthly basis and can pick a theme of complaints that they wish to review which have been completed in the last month for example Stop and Search, Incivility or Custody. The OPCC then review the complaint in full as an independent dip sampler to ensure that process has been followed and that a reasonable and proportionate outcome has been reached. The OPCC also review learning and if they believe there should have been learning this can be raised either directly to Professional Standards Department or to the Force Executive Team via Delivery and Beating Crime Board.

During our dip sample, we review the following:

Lower dissatisfaction complaints which have not met the Schedule 3 threshold are also dip sampled by the Head of Governance and Transparency and her team. Feedback is then provided to Bedfordshire Police. 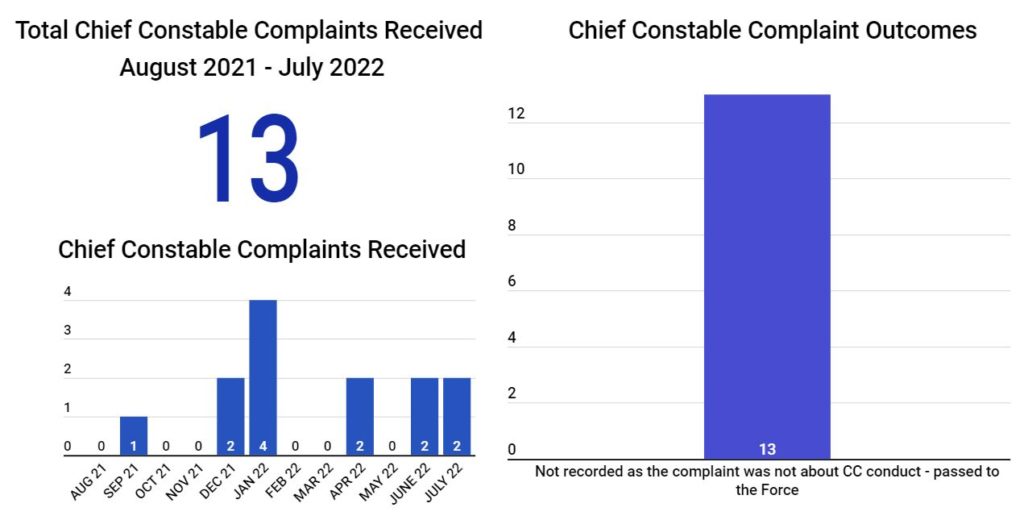 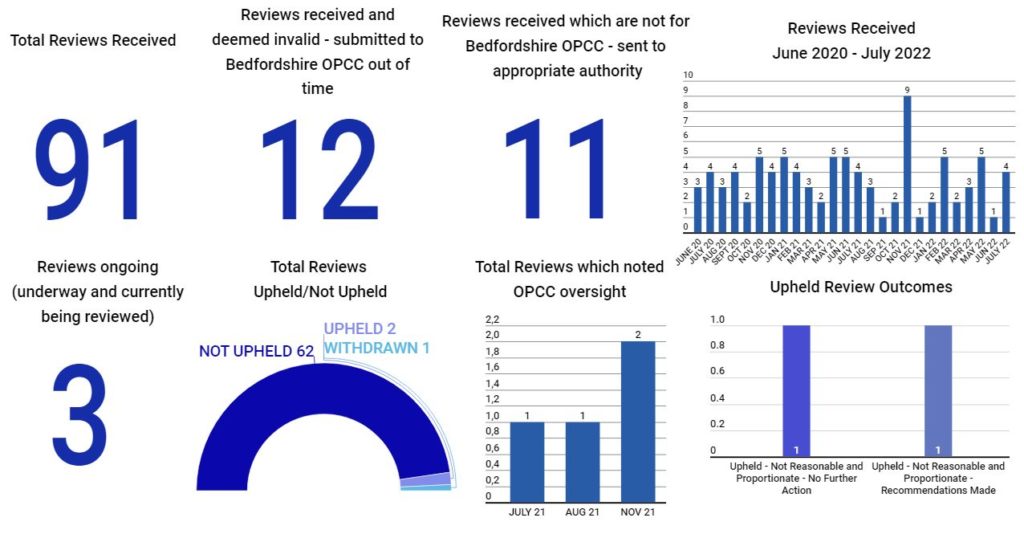 There has been two complaints received by the Police and Crime Panel since May to present (January 2023), however only one complaint merited consideration by the Panel. 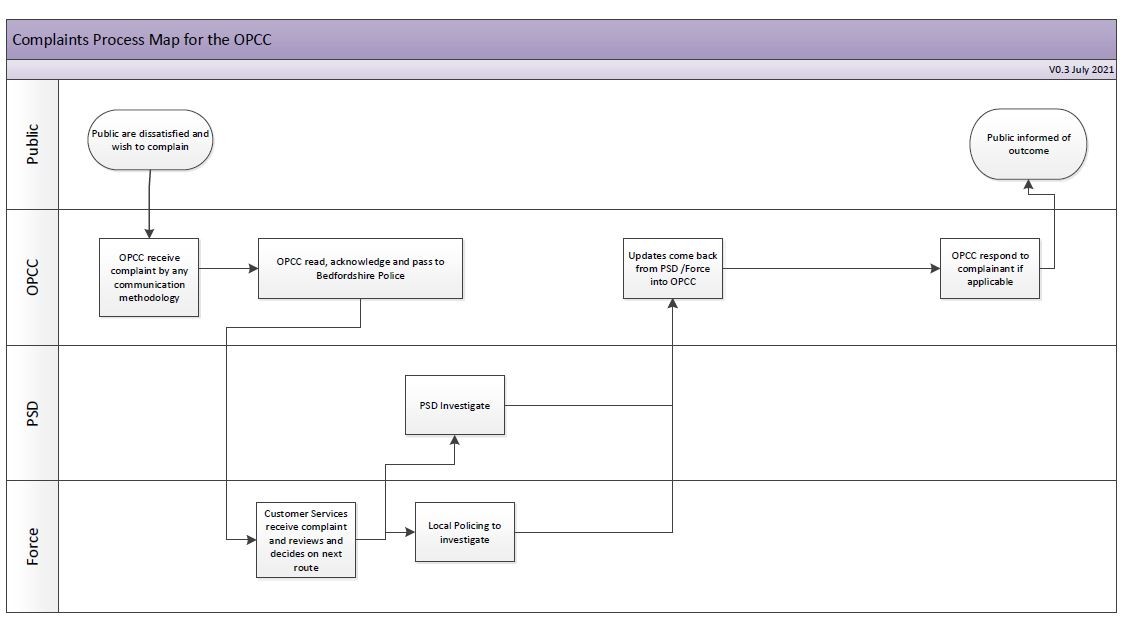 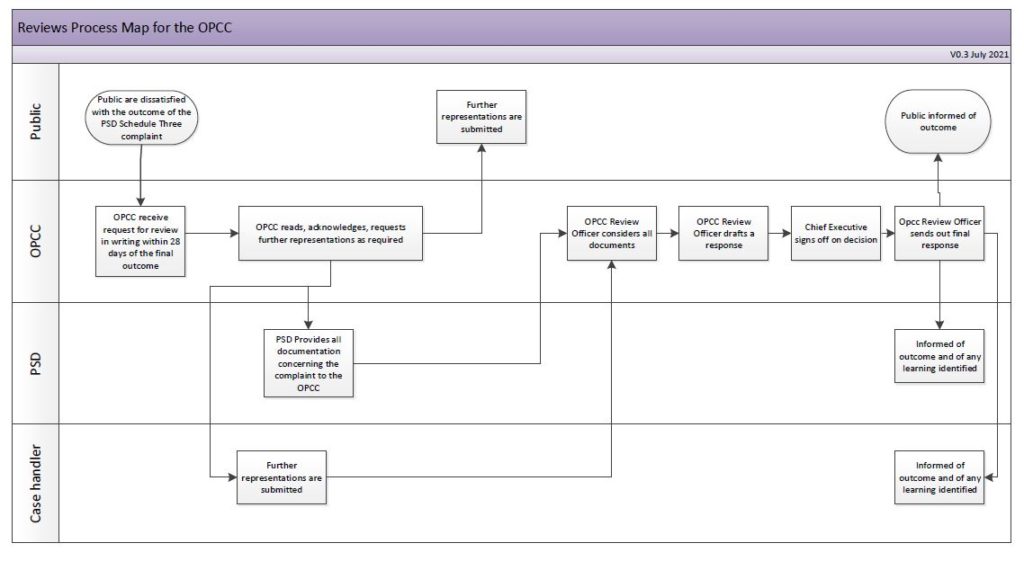 The most recent IOPC quarterly data report is for Quarter 4 and the reporting period is from 01 April 2021 – 31 March 2022. The report is available to read on the IOPC website under section ‘latest bulletins’.

Legally, Bedfordshire Police must provide the IOPC with their response to a recommendation within 56 days – unless there are valid reasons not to.