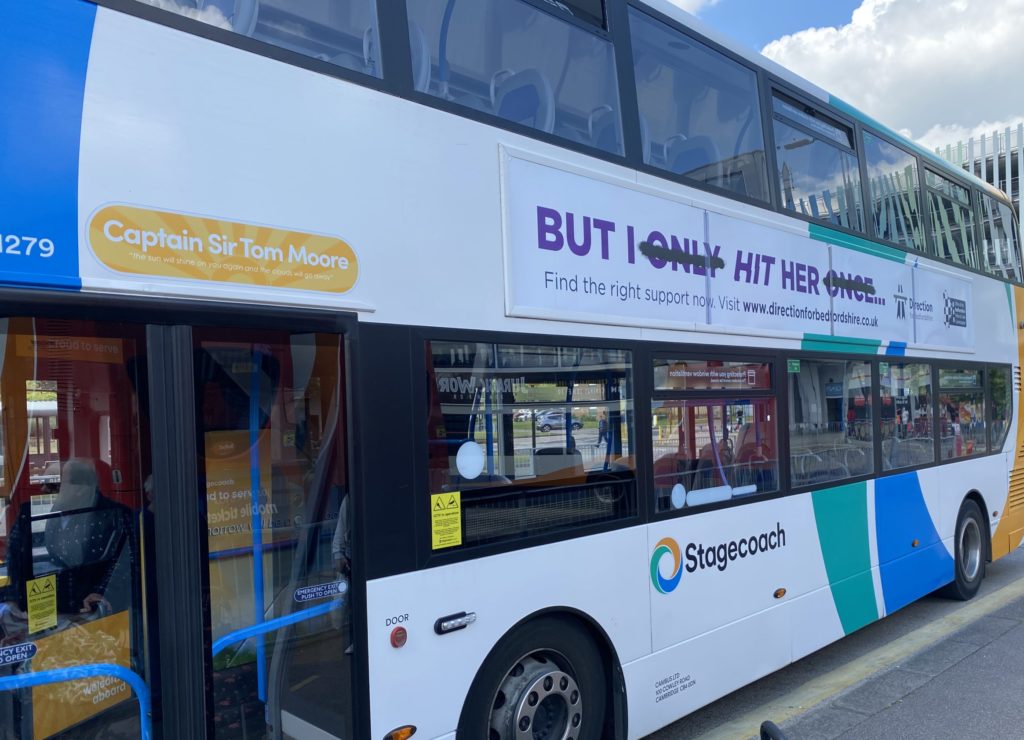 In a first for the county, the Bedfordshire Office of the Police and Crime Commissioner (OPCC), is reaching into new audiences with a bus and audio campaign to highlight the support that is available to people affected by domestic abuse.

The campaign, which launched on Monday 6 June, is aimed at three groups of people – victims of domestic abuse, friends of victims, and the perpetrators of abuse – as well as raising awareness throughout the community.

Following on from the PCC’s recent funding announcement that provides the most wide-reaching support services ever commissioned by the OPCC for victims of sexual violence, exploitation and abuse, the campaign highlights where to turn if you are affected.

The powerful messaging that can be seen on the side of the buses features the messaging ‘I only hit her once’, with the words ‘only’ and ‘once’ crossed out.

Members of the public will see the campaign featured on 20 buses across Bedfordshire that travel in and out of the county and go as far as Northampton and Rushden in Northamptonshire and Hitchin in Hertfordshire.

The audio campaign can be heard on any device connected to the internet including smart speakers, phones, laptops as well as radio stations in the county.

Police and Crime Commissioner (PCC), Festus Akinbusoye, said “I pledged to break the cycle of re-offending, to place victims at the centre of what we do and to take a multi-agency approach to crime reduction. I am completely committed to working with Bedfordshire Police and our partners to tackle all forms of domestic abuse and supporting victims across Bedfordshire. This powerful campaign is just one way of doing that.

“Using different ways of getting information into our community, beyond social media and traditional leaflets means that thousands of people will see these messages.

“I want people to know that if they fear someone they live with, we are there for them and there is help available. We know that people who identify as being lesbian, gay, bi-sexual and transgender suffer abuse. We know that men suffer from abuse, and we know many women also suffer from abuse. I will be relentless in opening channels of communication so that people can reach out to get the support they need.

“The majority of perpetrators are men, and we need to break that cycle, to get men to think about the damaging consequences of their behaviour.

“I want to help perpetrators of abuse take that first step to getting help.  There is no place in our society for controlling, coercive, threatening, degrading or violent behaviour, including sexual violence, by a partner, ex-partner, a family member.

“I am asking everyone to look out for friends, family, and neighbours and to report domestic abuse. Do not let it be too late. There are lots of support services available for anyone affected by abusive behaviour. Help is out there; you are not alone.

“If you see one of our buses or hear one of our adverts and you do not live in Bedfordshire, get in touch and we will make sure you find the right support in your local area.”

Detective Chief Superintendent Dee Perkins, Head of Crime for Bedfordshire Police said: “I wholeheartedly support this campaign. Domestic abuse is a serious crime, and I am particularly pleased that this campaign focuses on building confidence with victims and friends of victims, whilst remaining firm that we will do everything in our power to bring perpetrators to justice and stop the cycle of abuse.

“I remain committed to working with the OPCC to tackle all forms of abuse, supporting victims of any gender, and tackling and convicting both male and female offenders.”

Domestic abuse can include, but is not limited to the following:

Abuse can begin at any time in a relationship, after a relationship has ended or within a family, and it takes place at all levels of society, regardless of social class, race, age, religion, sexual orientation, or disability. Individuals may experience abuse or be affected by it long after they have left their abuser.

If you live in Bedfordshire and have been a victim of crime, whether you have reported it to the police or not, no matter when or where it happened, you can access support from Bedfordshire Victim Care Services.

In an emergency, please call 999 as always.

We would love to know if you have seen any buses whilst out and about around Bedfordshire, so please take a photo (if safe to do so) and share on social media stating where you saw the bus using the hashtag: #domesticaBUSebeds 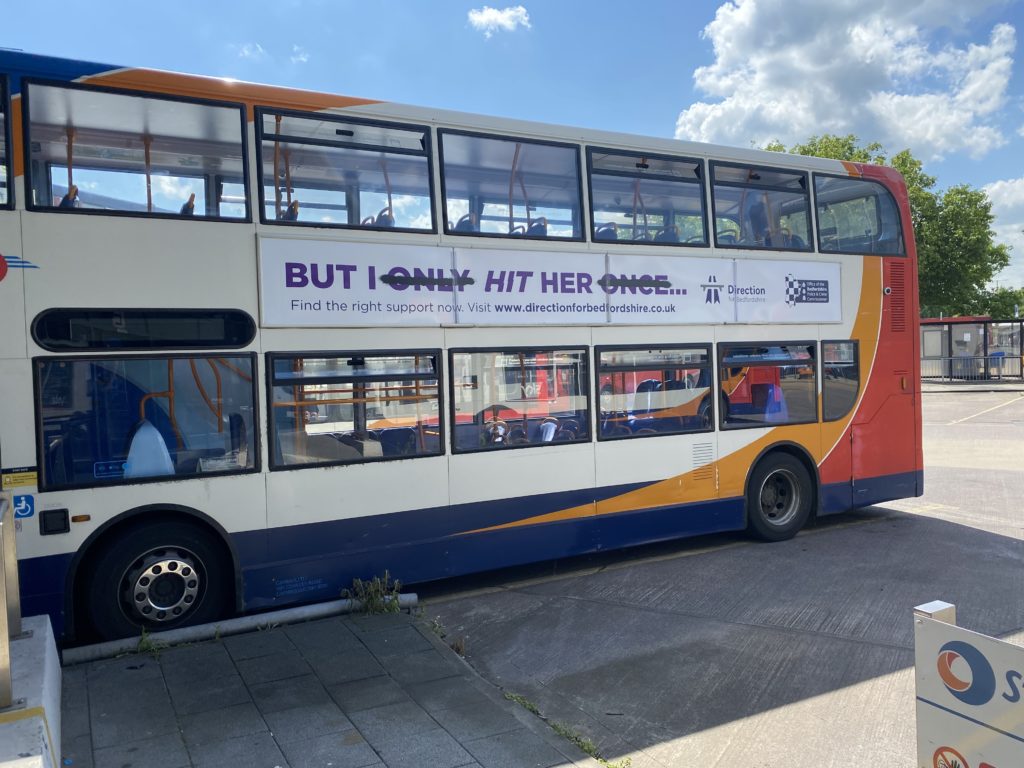 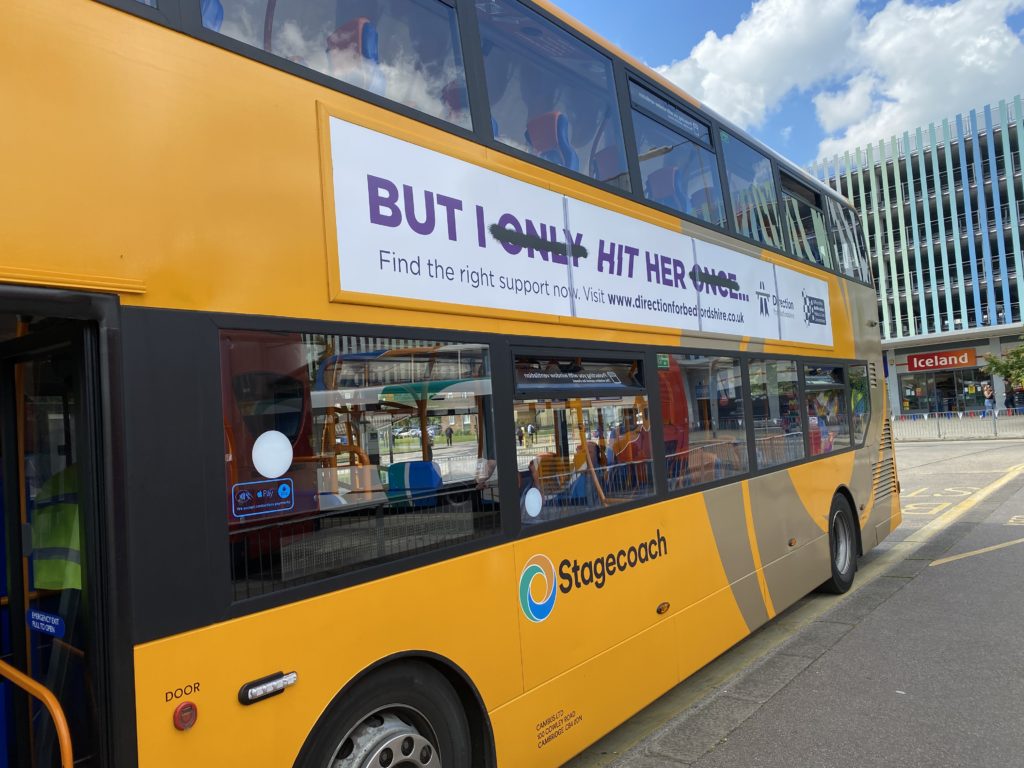 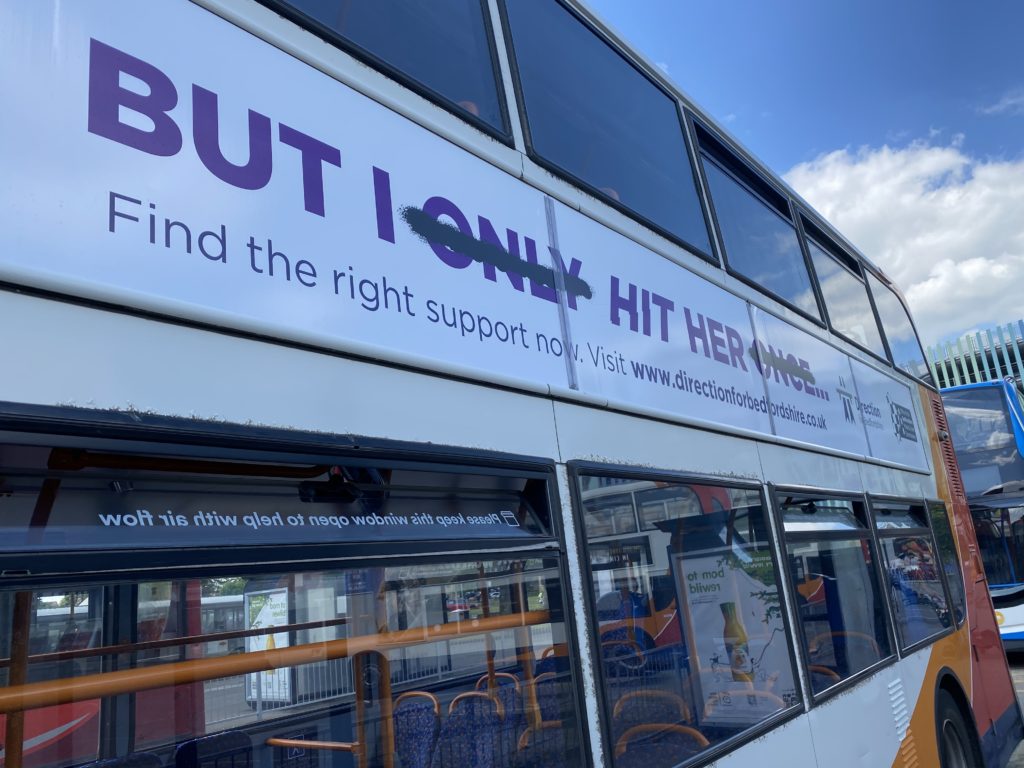 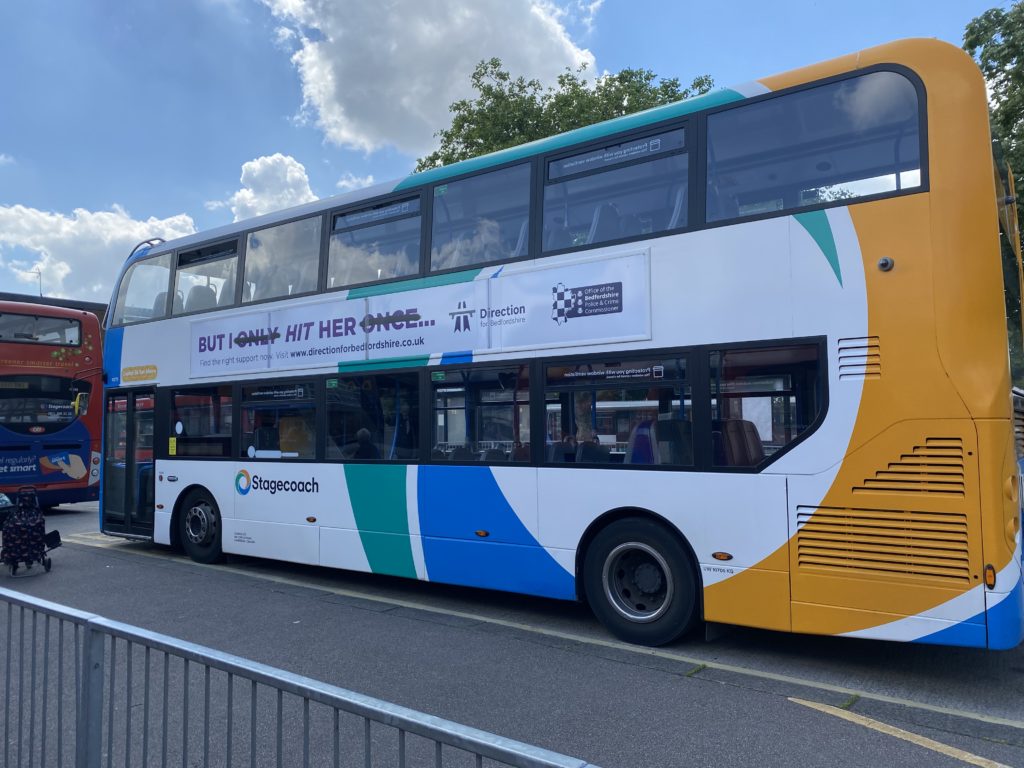