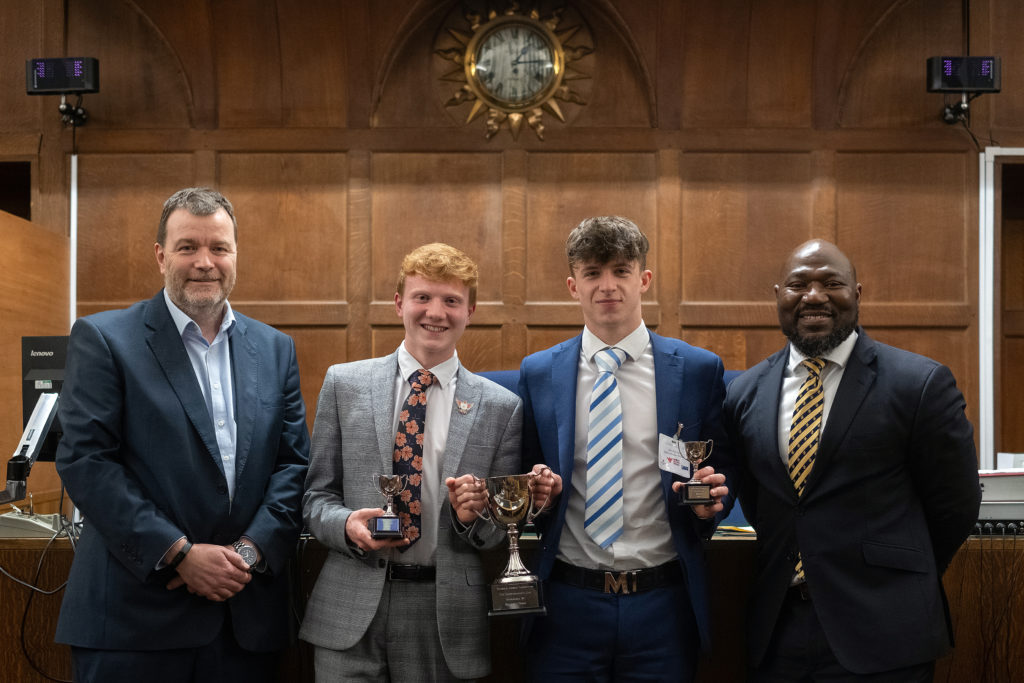 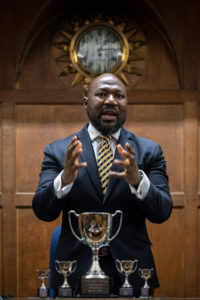 The Office of the Police and Crime Commissioner (OPCC) recently hosted two rounds of the PCC’s first ever Schools Parliamentary Debating competition.

This week saw the PCC host the final at Bedford Magistrates Court as two Bedfordshire schools battled in a real-life parliamentary setting for the Commissioner’s cup.

During his campaign the Police and Crime Commissioner, Festus Akinbusoye pledged to run an annual debating competition.

Young people aged 15-18 years old were invited from Bedfordshire schools to take part in the competition, proudly sponsored by Willmott-Dixon, a national construction company who have recently developed the new custody block for Bedfordshire Police.

Bedford Modern and Icknield High School in Luton made it through both rounds and to the finals with Bedford Modern winning the competition.

Police and Crime Commissioner, Festus Akinbusoye said: “The competition was a great spectacle of what our young people are capable of when given the opportunity. It was actually breath taking tonight.

I believe in the power of communications and engagement.  As Commissioner, I have tried to do that when engaging with the public.  I am very passionate about giving young people the chance to develop not only their public speaking skills, but also their self esteem and more importantly giving them the ability to talk about a topic from different angles – which they have demonstrated they can do very well.

te debate too.  I’m truly proud of all participating schools, and grateful to teaching staff for their support also.

“The 2022 debating competition will kick-off in November. I can’t wait”.

The debate motion for the final was ‘Schools should have the power to do a body search on pupils on school premises’.  Bedford Modern argued in favour and Icknield High against.

The Commissioner further commented “This is obviously a very topical and relevant subject.  I wanted the students to have the opportunity and challenge of debating a real-life topic and one that is highly emotive”.

Malaika Subhani, from Icknield High School said “It’s definitely been an experience that we will remember for the rest of our lives.  We will probably tell this story to our kids.  It’s been a good experience to debate with such skilled pupils such as the boys from Bedford Modern. We can learn a lot from their skills.

“I would say to others thinking of doing a similar thing, just go for it, it’s a lot of fun. It doesn’t matter if you win or lose, you get experience from preparing a speech and handling situations from your opposition”.

Chabnam Atif also from Icknield said “I would highly recommend it, even if you don’t come out as winners, you will learn skills that you can take with you into your life”.

Sam Manning from winning team, Bedford Modern said “I am ecstatic to have won.  It’s definitely helped with public speaking; it’s given me more confidence and will help with university interviews in the future”.

Zak Mounter also from Bedford Modern said: “The debating competition really allowed me to learn about interventions.  To have the opportunity to test ourselves thinking on our feet will really help me with progressing my career in politics or international relations”.

Judge Patrick Peruško said: “Superb event.  I came not really knowing what to expect. This was infinitely more impressive than anything I’ve seen before because these young people were able to not only articulate their arguments so well, but to also think on their feet, and their delivery was outstanding.

“They should all be very proud of themselves.  Thank you for inviting me along to help judge”.

Deputy Chief Constable, from Bedfordshire Police who joined the judging panel was very impressed.  Mr Rodenhurst said: “It was a privilege to be there with young people with real talent.  They are two very different schools with two very different styles.

“Both styles and presentation showed a level of deep confidence from the heart and authenticity on a very emotive, relevant topic.

“For young people to be able to be able to demonstrate, at that age, they’ve got a knowledge of current issues, how that affects society, the relevant law, and to put all of that together and not lose their confidence when asked a difficult question and deliver in front of a court of people – really impressive.

“Congratulations to Bedford Modern on winning and Icknield High School on such a fantastic debate”.

Lady Munya, from Pamtengo radio and the judging panel said “It’s been an exciting evening. At one point, I was tempted to join in with the debate myself.  It was my first time being a judge and it was quite an experience.  The speakers were all very good.

“It was a very difficult decision for us to decide who won as they were all very confident.  They all knew what they were talking about, they did their homework – they were excellent.  I’m looking forward to the next debate in November! Thank you to the OPCC and the Commissioner”.

Dr Tahir Mehmood from Luton who also judged the competition said “I’m very glad that I was here this evening.  Many thanks to Festus and his team for giving me the opportunity to come and see these young people speaking very passionately about the topics they were given.  I was happy to see the way they respected each other when they spoke, how they handled the interventions.  I wish them all the very best”.

The two schools have since been invited to spend some time visiting various departments at Bedfordshire Police Headquarters.

If you’d like to find out more about or to contact the office about the next School’s Debating competition in November, please email pcc@beds.police.uk